Gerald had owned his home for the past 53 years and was getting ready to put it on the market. He knew that there were some things that needed to be addressed before he would be able to put it up for sale. One of his concerns was the tightness of the crawlspace in some areas which he knew would have to be excavated. Another of his concerns was that there was an area of the house where the floor was sagging and lacked support below. And the last thing he was concerned about was the vapor barrier.

Forefront Construction sent out one of their lead System Design Specialist to meet Gerald and inspect his crawlspace. The System Design Specialist did have a tough time crawling through the crawlspace and it was very tight in some areas. He was able to analyze the areas where the floors of the home were sagging. While he was conducting the inspection, he also noticed signs of water intrusion and informed Gerald of this issue as well.

Gerald was presented with a proposal to address all the issues found as a result of the inspection. He was informed that to address the water issues, it would be best to install a full perimeter drainage system with a pumping system. To address his main concerns, Forefront Construction proposed to install crawlspace jacks, install a 20 mil vapor barrier, and excavate the crawlspace to allow more room in the tight areas.

The production crew was able to complete all the work in a week and half. The most difficult and labor intensive part of the project was excavating the crawlspace to allow more access for movement. Once this was finished, the installation of the system went rather quickly. The crew installed the drainage and the pump so that the incoming water would be directed away from the foundation, the 20 mil vapor barrier encapsulation, and 3 crawlspace jacks to support the sagging floor.

In the end, all of Gerald’s concerns were met, and his home was now ready to be placed on the market. He had no doubts that it would pass all the inspections needed, and that there would be no delays in selling his home. 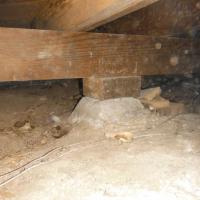 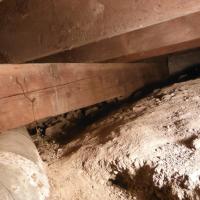 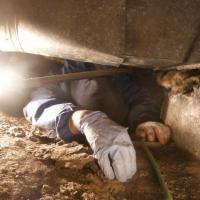 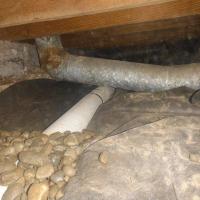