Jerry turned to the internet after a car had jumped the sidewalk and crashed into a retaining wall on is property.  Because of the incident, there was now a crack that was about 2” wide among other things that were damaged, and he was concerned about stabilizing the wall. He turned to home advisor, who then connected him to Forefront Construction, to help him in finding someone who could come out and address the retaining wall in the Kirkland area. Jerry was looking for someone that would be willing to work with him and his insurance company as they would be the financially responsible party.  Forefront Construction informed him that they would be able to work with him if he decided to go forward with any of the proposed work.

Upon the evaluating the retaining wall, Jerry was given a proposal to address the cracking in the wall as well as replacing the section of the damaged wall and the handrail. After receiving multiple bids for the project, he decided to move forward with the bid provided by Forefront Construction. There were two reasons why he chose Forefront Construction over the others. One was because the fact that they provided a proposal to address all the things that had been damaged by the accident. The other was that they were willing to work with the insurance company without hesitation-meaning that they had experience working with third parties for payment.

The crew spent 5 days working on Jerry’s project. They had to remove some areas of asphalt, had a few complications when installing the wall and earth anchors, and had to replace the hand rails, but in the end you couldn’t tell that there had ever been an issue with the wall. Everything looked like it did before the accident. Jerry was afraid that the integrity of the retaining wall was compromised and that in the future he would have to demolish and rebuilt that wall, but the wall anchoring system that Forefront Construction installed meant that he no longer had to worry about having to rebuild that entire retaining wall. 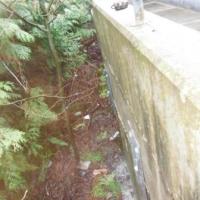 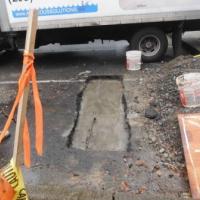 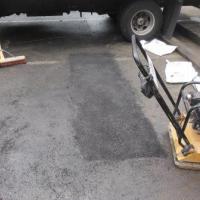