Ms. Fuller turned to Forefront Construction Foundations after having purchased her home and moved in.  She was aware of the foundation issues that her new home in Puyallup had as she had an inspection done; she just didn’t think that the issues would gradually get worse. “I knew that there were major foundation issues like cracks in the foundation and the sagging of the floors. When we first looked at the house, I was ‘I can live with this it’s not too bad’ but after being in the house for a month and walking around on a daily I can’t take it anymore. So here I am calling you for help,” she stated to Shayna, the Customer Service Representative that answered her call.  As Shayna gathered more information on the foundation problem that Ms. Fuller was having with her crawlspace, she knew that the perfect inspector to send out to meet with her and address her foundation issues was Tom.

When Tom came out to meet the Ms. Fuller, he conducted a complete inspection of her crawlspace and the foundation.  He worked with Ms. Fuller to address her main concern about the sagging floors. When Tom conducted his inspection, he realized that there was an area in the crawlspace that was lacking support and various other areas where the posts were not supporting the beam above. He proposed the installation of 15 crawlspace jacks as well as a new supplemental beam to take care of the sagging floor issue. When he explained and showed Ms. Fuller the pictures of the areas that he was referring to, Ms. Fuller was grateful that he took the time to show her the problematic areas. “I was glad that he showed me the pictures and then answered all my questions thoroughly. I was very impressed that he took the time to explain everything to me and answer all my questions. The other guys weren’t so thorough. I spoke with my husband about the proposal I received and told him I felt most comfortable with Forefront Construction’s bid and solution and that is why I chose them to do the work for me and I have no regrets.”

“The day the crew arrived I was so impressed at how professional they were. They introduced themselves to me and explained the process of installation. They let me know what to expect as they installed the new beam and the crawlspace jacks,” she says. The crew took two days to complete the work. “They worked very efficiently and the cleanup, well, let’s just say that you couldn’t tell that anyone had done work in my crawlspace, well with the exception of the jacks and the new beam. And let me tell you, I have no issues walking on my floors anymore, everything is level and I couldn’t be happier!” 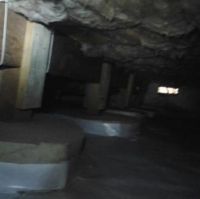 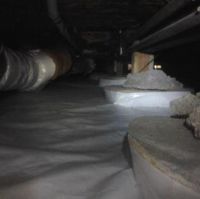 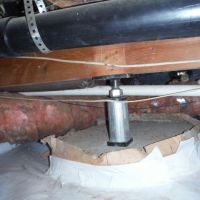 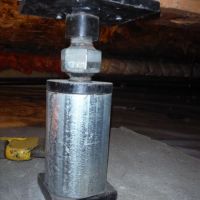 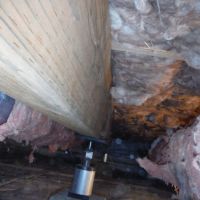