Ms. Collins had just recently purchased a home in Tacoma, WA with foundation issues. She was well aware of the problems with the foundation when she purchased the home, but now was in need to find someone to address those issues prior to moving in.  She found Forefront Construction through Home Advisor and contacted them in regards to the issues the house had. Forefront Construction sent out a specialist to meet with Ms. Collins. Her main concern was just stabilizing the foundation so that things wouldn’t get worse. She had noticed only a little bit of settlement and cracking on the North and East side of the home.

After conducting  a complete inspection of the foundation, she received a quote for installing 15 push piers to stabilize her foundation and prevent further settlement. She also received a quote for adding a supplemental beam and crawlspace jacks to add support to her porch. After much thought, Ms. Collins decided to hire Forefront Construction to complete the proposed work. It took a few weeks after accepting the proposal for the work to be scheduled due to the permitting process, but once the permit was obtained, she was on the books for the installation.

The crew arrived onsite and began marking the area for the proper installation as per the approved plans by the city. Once everything was mapped out, the installation began. They were very careful in containing the soil from the excavation and were able to install all 15 piers in 3 days so that the inspection could be scheduled without delaying the job. The crew was very efficient in that they worked on the supplemental beam and crawlspace jacks, while they waited for the inspector to arrive on site. On the fifth day of the job, they were ready to back fill and complete all the work, after passing inspection. The crew left the area cleaner than it was before they started the work. They completed the walk through with Ms. Collins to make sure that she was satisfied with all aspects of the installation. Upon knowing that she was satisfied with the project, the crew informed her that she would be receiving a call from the office in regards to her warranty information and paid in full invoice. When the office staff contacted Ms. Collins, she couldn’t stop praising the work that the crew had done. She was definitely not disappointed in choosing Forefront Construction to address her foundation issues. 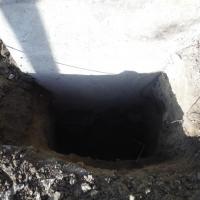 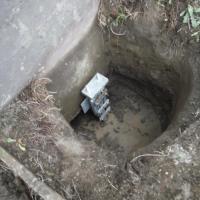 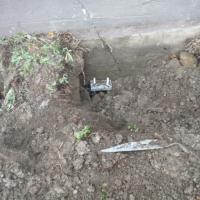