Mr. Fox called Forefront Construction after looking for a company that specializes in foundation settlement problems. After coming across the name Forefront Construction, I decided to contact them. The gal who took my information on the initial call was very courteous and kind. I let her know that the main problems I was having were the cracking of my walls and my ceiling and that my doors would stick when you open them. She helped me and sent out someone to conduct an inspection of my house,” was what Mr. Fox said helped him come to the decision to hire Forefront Construction.

When an inspector arrives at a home, he introduces himself and gathers more information about what the homeowner is most concerned about. After gathering this information, and conducting a complete and thorough inspection, he reviews his findings with the homeowner. In Mr. Fox’s case, the inspector concluded that he needed 6 push piers to level his home and one crawl space jack, as the existing post would need to be addressed after the lift.  Before he went forth with the repairs, he wanted some references and possibly visit a current jobsite. The inspector referred him to the office staff for further information.

A few days later, he contacted the office with his request and he received 3 references that he could contact and speak with in regards to the work and also was informed of an installation in his area that he could visit to see the work being done. When Mr. Fox arrived on the jobsite he met with the production manager and watched the crew install push piers. The day after, he called the office and scheduled the work to be done at his home.

The crew came out and completed the work in 4 days with no issues at all. Everything was back to the way it should be. Mr. Fox had no more sticking doors and his home was level. His next step was to fix the cracking in his drywall. He couldn’t be happier with the crew and the installation. They left everything nice and clean and level; which was the best part! 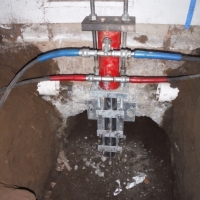 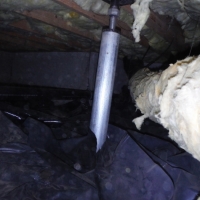 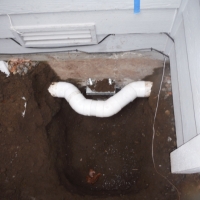 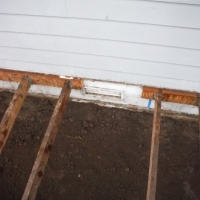