In her desperate search for a foundation repair company Jackie found Forefront Construction online. She sent us an email detailing her foundation problems, noting settlement in multiple areas on her hillside home including a concrete pad on the front of her home that was caving inwards and pushing up against her foundation walls. Jackie’s original thought was that the pad was caving in due to water passing below the pad and washing away the dirt below it. Her already compromised foundation was now becoming even more stressed with the added pressure from the settling patio. To investigate and diagnose properly we sent our top design specialist, with over 20 years’ experience in the foundation and concrete industry he was the perfect person for the job.

Upon his extensive investigation he concluded that Jackie’s home was settling, for sure, but not due to water passing under the slab. The settlement had occurred due to the shifting soils under her hillside home. The proper solution for Jackie’s foundation problems was a combination of push piers and slab piers. The push piers where recommended to support the foundation walls and prevent further settlement from occurring. The slab piers where recommended to support the slab that was caving inwards and bring it back to level position away from the foundation walls.

One concern that we had going into this job was the condition of the current slab, there were several large cracks and some crumbling. Knowing this would be a fragile task we sent our most experienced foreman to her home. If anything unforeseen happened, he was the right person to be on site and would know how to properly handle the situation to remedy any possible issues.

Our crews worked very hard for 3 days to accomplish Jackie’s goal of supporting her home and making certain no further damages occurred. Although we did have to replace the existing slab due to the large amounts of cracks in it we were able to accomplish her requests and she no longer has to be concerned about her hillside home settling any further. 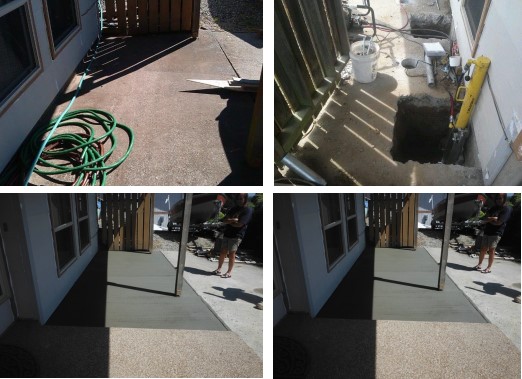