Peter called Forefront Construction in hopes of having someone come out and look at his crawlspace in his home, especially since there was a small 50 square foot area in his kitchen where the floors had settled about 1 ½ inches. His home sits on post and piers and he had a feeling that if he was having this problem in the kitchen area, he may have more issues throughout his home. There was also a section of the skirting that was missing where you could clearly see that some of the posts were not posts but rather sections of lumber just stacked on top of one another. Peter hadn’t been in the crawlspace himself as he said, “Even if I go down there, I wouldn’t know what was right and what was wrong. The only thing I do know is that I do have issues and it’s just really dirty and probably should have the crawlspace cleaned out as well.” Lucky for him Forefront Construction could address both these issues.

After having completed a very thorough inspection of his crawlspace, Peter was given a proposal to remove all the debris from the crawlspace, as well as replace all the inappropriate supports of his home. Because there were multiple posts that were simply pieces of lumber stacked on top of each other, Forefront Construction proposed to replace a total of 18 posts with crawl space jacks and install new cast in place footings, as well. Peter didn’t have to think twice about hiring Forefront Construction. He had contacted other companies, and none were as thorough as Forefront. He signed the contract right then and there and was contacted by the office to schedule the installation the next day. The work was scheduled to begin a week after he had signed his contract.

The crew arrived on site and even though the crawlspace was quite tight, they begin removing all the debris quickly. They next added temporary support in all the areas where the new Crawlspace Jacks were to be installed. Peter knew that this job would be completed in stages as all new footing pads would be installed as well. After the crew prepared and poured the new footing pads, there would be a waiting period to allow the concrete to cure then the Crawlspace Jacks would be installed. Over all the process went smoothly and quickly. The crew was able to level the floors in the kitchen only after adding a new supplemental beam to help with the weight load above. “I was impressed with how well the crew did working in such a tight area. I can safely say that I made the right decision in choosing this company. The fact that they worked so efficiently and that the outcome now looks structurally safe eases my mind and I know that I won’t be having any issues with settlement throughout my home.” 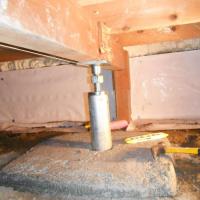 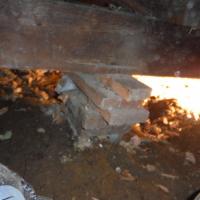 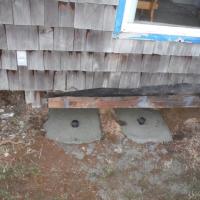